Steve* had been watching his older brothers hair receding and getting thinner on top for a number of years…he was also noticing that his hair was beginning to follow the same pattern. As a very busy tradie, he kept his hair mostly short but he was still concerned about the rate at which his hair had started to recede, especially in his temporal region. Although there didn’t seem to be a previous family history of hair loss, Steve didn’t want to see his shedding accelerate to the same rate as his brother.

After hearing a radio advert for Ashley and Martin hair loss clinics, Steve decided that he too had reached his ‘turning point’ and he made an online enquiry on their website requesting a call from his local clinic. Taking a few hours off work, Steve attended the initial appointment by himself and discussed his options with the consultant. He was fit and healthy and, although he was very busy in his work as a plumber, it wasn’t a job that placed undue stress on him. His consultant recommended the RealGROWTH® medical hair loss program to address his level l-ll hair loss. This program delivered a combination of interventions – each one specifically designed to target different facets of the problem – from halting and controlling the loss, to stimulating new growth by returning dormant the hair follicles to the growth phase, and then nurturing that new growth as the program progressed.

Steve went away to think about the treatment that had been offered…he was keen to commence but work and life circumstances prevented him from returning to the clinic. Finally, after another eight months had passed, Steve returned to the hair loss clinic to commence his treatment.

Three quarters of the way through his treatment, Steve returned to the clinic for his review. He still kept his hair very short but could see that the recession in his temporal region had been halted and the follicles on his vertex were growing back more dense and thicker – an outcome that he was very happy with. He was looking forward to the remainder of his treatment program delivering even more positive results…maybe he would even mention it to his brother. 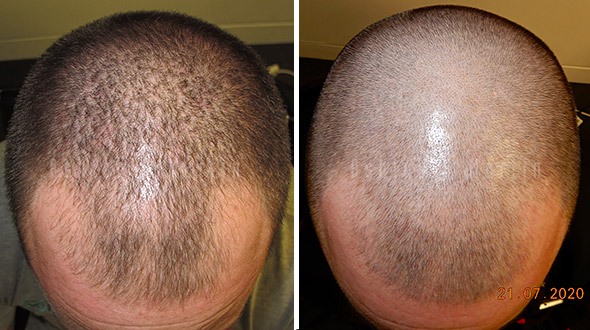