Looking at the reasonably dense horseshoe hair on the sides and back of Greg’s* scalp, the Ashley and Martin consultant could see that thirty-three year old Greg was close to progressing to a level VII on the Norwood hair loss scale; the most severe form of hair loss on the Norwood scale. With only a sparse covering of hair remaining between the frontal hair line and vertex of the scalp, the small bridge of midscalp hair connecting both sides was almost gone. It was a shame that Greg had not moved forward with treatment four years ago when he had visited the clinic previously.

Having heard about Ashley and Martin when he was working overseas in Australia, Greg had found the New Zealand Ashley and Martin website whilst looking online once back home. Contacting his local clinic through the online contact form, Greg had attended an appointment to find out more about treatment. Although conscious of his looks at the time, he had chosen not to move forward. Greg’s advanced hair loss had taken place over just five years and now, having had a major change to the direction of his life thrust upon him, he had decided it was the right time to do something just for himself.

Addressing the male pattern baldness he had inherited from his father and grandfather with a multifaceted RealGROWTH® medical hair regrowth program, Greg adhered closely to the at-home daily treatment plan and attended regular laser therapy appointments in the clinic. It didn’t take long before his friends began to notice the changes and after sixteen weeks, his first Ashley and Martin Review appointment showed a substantial difference. Ecstatic with the changes in his appearance he was seeing take place in such a short amount of time, Greg was pleased he had taken steps to make himself happy after all this time. 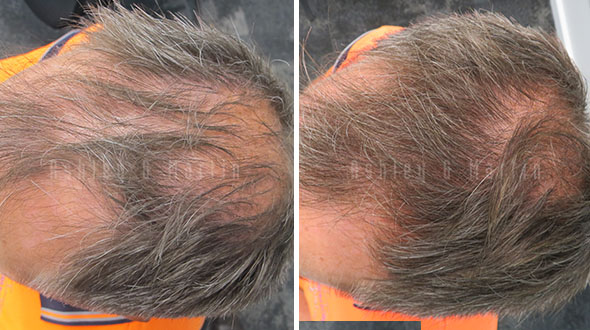