At 24 years old, Timothy* was growing more and more concerned about his appearance. He had first found out about Ashley and Martin medical hair loss clinics through TV advertising and in fact, had made a visit to the clinic a few years previously for an obligation free consultation. At that time he had chosen not to start any treatment but now, two years later, the thinning had worsened and had become quite noticeable. Timothy had reached his turning point and went back to the clinic to enrol on a treatment plan.

His consultant performed a scalp examination and Timothy disclosed that there was a family history of hair loss. The consultant diagnosed him with stage 3 vertex male pattern baldness but reassured Timothy that, because he was addressing the problem at an early stage, the treatment routine that he was going to prescribe should deliver favourable results.

Timothy signed up to the Ashley and Martin RealGROWTH® treatment program with laser delivery. The plan was specifically tailored to Timothy’s needs and he left the clinic feeling reassured that his hair fall would be halted and reversed.

As the treatment progressed Timothy could certainly see the difference on his vertex. His bald spot had started to cover over with new growth and even the sections of hair that had not been thin were growing thicker and stronger strands than before. At one of his follow up appointments Timothy told his consultant that he was ‘stoked’ with the results he was getting and that having that regrowth over his previous bald patch had really helped his confidence. 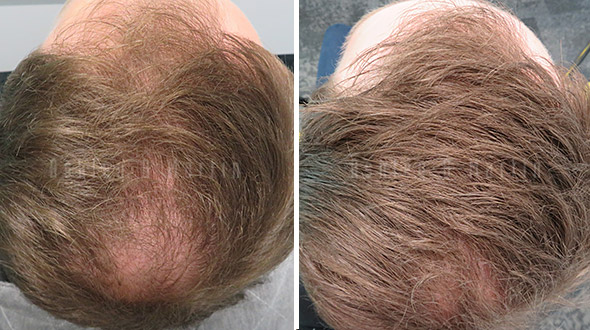