Aarav* was astounded by the before and after photos at his nine month progress review. His own research had brought him to an Ashley and Martin medical hair loss centre because it had showed that they delivered the best results and Aarav could certainly see that.

Originally from Sri Lanka, Aarav had moved around a fair bit in his 33 years. First to Australia and then to New Zealand four years ago, where he lived with his partner. It was around this time that he first noticed that his hair was shedding and for the last two years he’d been considering getting professional treatment because he could see that it was getting much worse. He had tried over the counter treatments a few years ago but nothing had halted the accelerated hair loss and his crown had got to the stage where there was no hair left! It was as this point that Aarav began his research into the best medical hair loss clinics…and that’s how he arrived at Ashley and Martin.

He attended his first appointment with his partner who was very supportive and listened with Aarav as the consultant diagnosed him with Norwood IV Vertex hair loss. Male pattern baldness was genetic in Aarav’s family and his maternal uncle, his brother and his father all suffered from it – inherited genes determine your sensitivity to hormones called androgens, particularly one called dihydrotestosterone (DHT). Increased androgens in the hair follicles can lead to shorter cycles of hair growth, lasting just weeks or months. DHT stimulates the process of miniaturization, which causes new hairs to grow shorter and thinner than before. Eventually, the hair follicles become too small to produce new hairs.

Aarav’s consultant recommended the 12 month RealGROWTH® treatment plan; a multifaceted approach incorporating laser delivery and DHT inhibitors with the aim of halting the miniaturisation of the follicles and promoting new, healthy regrowth.

That new, healthy regrowth was now covering over Aarav’s bald spot and he couldn’t have been happier. 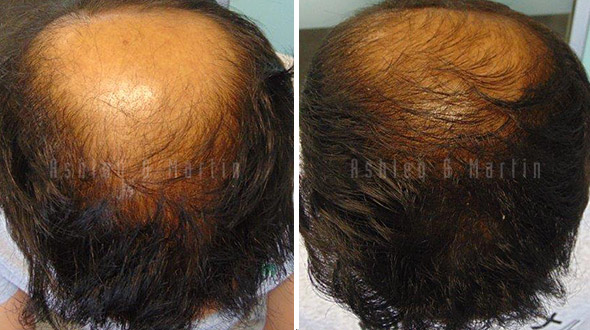