Pippa* was in her early thirties when she noticed her part line widening and hair becoming thinner. When she had given birth to her first child four years previously she had experienced excessive hair fall from which her scalp could be seen through. At the time, she had been told this was completely normal after childbirth and would return to normal soon enough. Two years later Pippa had her second child and once again experienced the same excessive hair fall. Unfortunately her hair still had not returned to normal after her first pregnancy, leaving her with a large amount of scalp visibility.

Pippa knew she needed to seek help from a professional hair loss clinic. The condition of her hair was not getting any better and she had a sinking feeling that it was only going to continue to get worse over time. Pippa booked a free consultation with Ashley and Martin.

During this first meeting, Pippa’s consultant could clearly see that the top of her scalp was much thinner than the sides. With no other health issues or family history of female pattern baldness that might be impacting the natural growth cycle of her hair, Pippa was recommended a RealGROWTH® program that was tailored to her needs.

As suggested by her consultant, Pippa started using a combination of laser therapy treatment, specially formulated scalp hygiene products and targeted dietary supplements. And within sixteen weeks, Pippa started noticing improvements. By the time Pippa attended her eight month progress review with her consultant, her hair had undergone significant regrowth. Her part line was returning to its natural state and the scalp that had been sparsely covered before now had thick, new growth covering it. Overjoyed she had found a solution to hair loss that was simple enough to fit into her daily routine with two small children, Pippa could breathe a sigh of relief – and happiness. 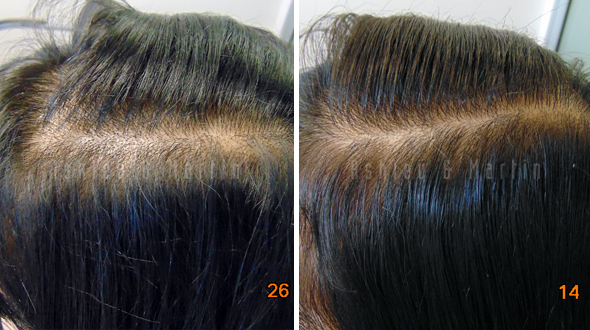