Simon* started his new year with an appointment at Ashley and Martin hair loss clinic. He had first noticed his hair thinning when he was just 20 years old; now at 26, he was growing even more concerned because his crown area had become noticeably thinner.

He had moved over to New Zealand from the UK just twelve months earlier and had previously tried prescription medications in the UK to address his hair loss but discontinued the treatment because he couldn’t see it making any difference.

During this first appointment at the hair loss clinic, he informed his consultant that he felt his hair loss was ‘inevitable’. Even though he was young, fit and healthy, a strong family history of Male Pattern Baldness throughout the family had led Simon to believe that this would also be his fate.

The consultant explained the treatment options that were available to Simon and he went away to discuss the options and costs that he had been given with his partner.

A few weeks later Simon emailed his consultant and said he was ready to get started. He was getting married in May 2021 and wanted to have his hair back by then, which the consultant advised, was more than enough time to achieve amazing results. He made an appointment with the doctor the following week and started the 12 months RealGROWTH® treatment that had been recommended on his first visit.

Keen to reach his goal of a full head of hair for his wedding, Simon followed the medication and shampoo regime conscientiously and had regular laser treatments.

His determination to stick to the diagnosed regime paid off. After just four months Simon was very happy with the results so far and could see that he was more than well on his way to achieving his goal of sporting a full head of hair for his bride on their big day. 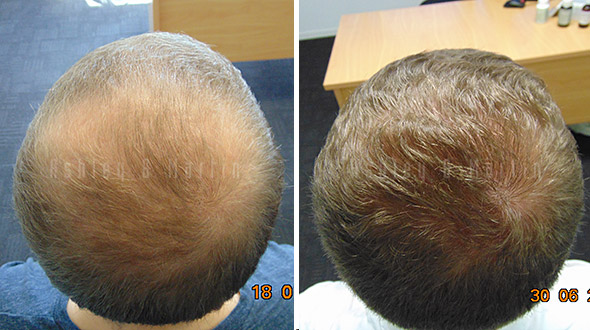