At 29 years old Reg* felt as though he was still too young to be losing so much hair…he was pretty much bald on his crown and knew that it was only going to get worse. It was, after all, genetic. There was a family history of male pattern baldness – his father, brother uncle and grandfather had all suffered from hair fall and now it was his turn.

He’d been considering treatment for the past year but didn’t really know where to go or, indeed, if treatment would actually work. He was encouraged to try an Ashley and Martin medical hair loss clinic by a friend who recommended their services. After reading some of their online reviews Reg felt hopeful that he had found a way to reverse the genetic family trend and made an online enquiry.

The clinic contacted Reg with a consultation date and Reg took his friend along for support. At the clinic it was no surprise that he was diagnosed with male pattern baldness – level VI on the Norwood scale – significant hair loss with balding areas at the temples joining with the balding area at the vertex and very sparse covering across the top of the head. He was offered the 12 month RealGROWTH® treatment program with low level laser therapy and Reg enrolled on the same day. He rented the laser device and took it home for use every second day and stuck conscientiously to his treatment regime.

At his first clinic progress review (four months into the treatment plan) Reg’s consultant asked how he felt about his results.
His answer; “Ecstatic!”

All of his friends had noticed his hair re-growth and had commented on how much younger Reg looked which was a huge boost to his confidence given that he hadn’t even turned 30 yet. He didn’t want to look older than his age and now he didn’t have to. 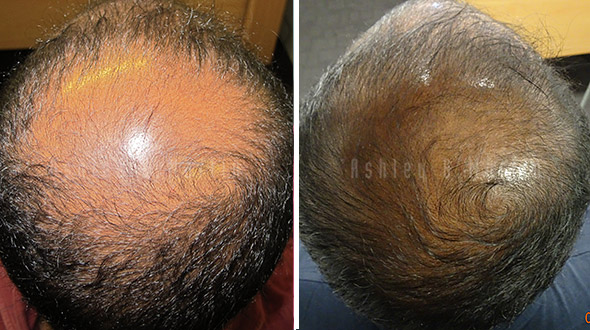