Self-employed tradesman, Andrew, was coming up to his fortieth birthday and he was becoming increasingly concerned by the large balding patch on his crown. It was not as if it had happened overnight; it had taken almost seven years to reach the drastic stage of hair loss he was now looking at in the mirror. Not rushing into the decision to treat his hair, Andrew took a year to consider his options and commit to even calling a hair loss specialist.

After weighing up all the information he had found online, Andrew found Ashley and Martin to have an excellent reputation and decided to find out how we could help. Andrew picked up the phone and spoke to his local clinic.

At his appointment, Andrew’s consultant discussed how Ashley and Martin’s RealGROWTH® program could address his genetically inherited hair loss by stopping the accelerated hair fall and work to regrow as much of his lost hair as possible. But before he committed to anything, Andrew wanted to go away and make a considered decision.

Andrew returned not long after his initial appointment, this with his wife. And together they committed to treatment for Andrew’s hair loss.

It did not take long before Andrew was starting to hear lots of positive comments from both his family and friends; the changes to his hair being visible to everyone who knew him. In under twelve weeks Andrew’s hair had improved beyond what he could have hoped for. His hair density had increased and Andrew’s brown hair was looking thicker and healthier. The recession in his temples was filling in, moving his hairline forwards. Overall Andrew’s new hair was giving him a much more youthful look and he was elated with the early results of his program. To Andrew, his RealGROWTH® had changed his life. 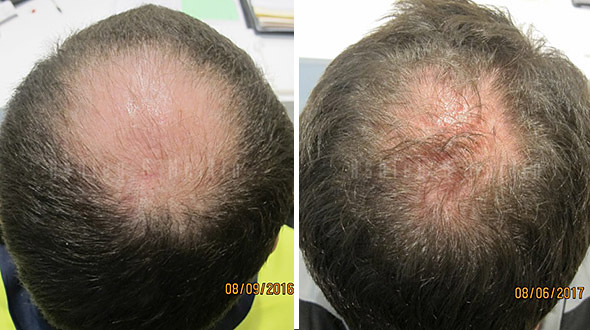