Treatment for hair loss was something Keirin* had always wanted to do but was hesitant to try. When he started to notice his hair fall increasing, Keirin reached his turning point. He had seen advertising for Ashley and Martin on TV and online, the success stories alleviating some of his hesitation. Finally convinced it was time to do something about his thinning hair, Keirin contacted Ashley and Martin for a free consultation.

Keirin went to his initial appointment hoping it would not be too late after three years of hair loss. And thankfully for Keirin, the Norwood III vertex loss the Ashley and Martin consultant saw was not beyond treatment. The excessive thinning from mid scalp to crown and deep recession in his temporal region was caused by combination of genetics and high stress levels and would be reversed by a combination of interventions. Prescription medications, herbal tablets, scalp hygiene products and low level laser therapy would all work together to combat his hair fall and regrow hair where Keirin had lost it.

Before proceeding with treatment, Keirin needed to discuss the medication he would be taking with his own doctor. His job required him to have regular blood tests so he wanted to be completely sure any treatment he underwent did not affect his employment. His doctor reviewed all aspects of the medical hair regrowth program his consultant had recommended and was happy for him to proceed.

Four months later, there was no looking back. He had started treatment as soon as he had the approval from his doctor, and he was amazed at how incredible the results had been. His sparsely covered scalp was covered in dense, healthy hair. Unlike his Uncle, 34-year-old Keirin had been able to beat the family genes and retain his hair. 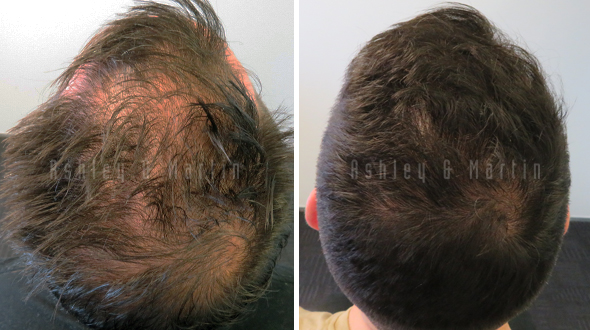