Charlie* was well aware of Ashley and Martin’s reputation; he’d seen the adverts on the TV, heard the adverts on the radio and read the case studies on the Internet. Yet there was still something stopping him making that all important appointment to go into a clinic and discuss his hair loss concerns.

Hoping to ease his concerns Charlies wife went along to her local Ashley and Martin clinic, with photos of Charlie’s hair she chatted to the friendly clinic staff. They informed her a scalp examination would need to be performed to make an accurate assessment of the type of hair loss along with what types of treatment would be suitable for Charlie. Charlie would need to attend the clinic in person. Feeling assured and positive with the advice she had been given Charlie’s wife convinced him to make his own appointment.

Meeting his consultant for the first time Charlie explained he had experienced slow hair loss over a 15 year period; it was now making him feel self-conscious. Charlie’s consultant could see the hair had become noticeably thin in the mid-frontal area and the crown region, diagnosing male pattern baldness.

After ascertaining the cause of hair loss the consultant discussed the hair growth products that would treat the root cause and regrow hair in the thinning areas. Charlie wanted to ensure he had the optimum program to achieve the best results but was concerned he would be unable to attend the clinic regularly for laser therapy treatments.

This was an issue for many clients with today’s busy work and life schedules, Ashley and Martin had the solution on hand as this was an issue. Charlie was able add his own laser cap to his treatment program where he could carry out his own laser treatment at home. Charlie signed up to the RealGROWTH® program straight away now confident he would be able to fully participate in the program.

After four months on the program the results were clearly visible, it appeared as if Charlie had never even suffered from hair loss. His genetically inherited Norwood III vertex loss had responded well to the multi-faceted treatment program. Charlie’s hair was now healthy and strong; thrilled with the results he wondered why he had been so apprehensive at asking Ashley and Martin for help. 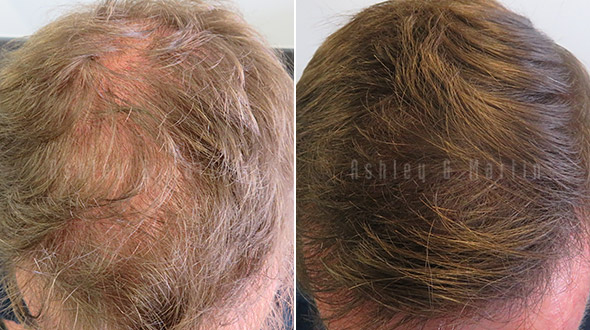