Levi* was 36 years old. Shy, single, fit and very particular about his appearance; which is why it bothered him so much that his hair was thinning so badly around his crown.

He heard about Ashley and Martin on a radio ad and, looking on their website, he could see that  they were the oldest and largest medical hair loss company in the Oceania region, with 21 clinics across Australia, New Zealand and Singapore. They offered medically proven efficacy and, after seeking treatment (unsuccessfully), from another hair regrowth studio, Levi was hoping that Ashley and Martin could deliver the hair regrowth results he was looking for.

At his free consultation, Levi told his consultant that he occasionally suffered from psoriasis on his scalp. After a scalp examination and review of his family history (his father and grandfather both suffered hair loss), he was diagnosed with Norwood stage III vertex androgenic alopecia – more commonly known as Male Pattern Baldness. After hearing that Levi had been to a different hair loss centre with no results, he explained exactly what was involved with the Ashley and Martin medical hair loss treatment plan and the likely outcomes of implementing the multifaceted RealGROWTH® program, including consistency with the laser treatments.

Levi signed up and stuck to the plan diligently and was stoked with the results.

He was growing his own healthy hair back over his previously thinning crown and he could see and feel the difference. Ashley and Martin had delivered results but more than that, they had given shy Levi the confidence to be more social and less worried about his appearance. 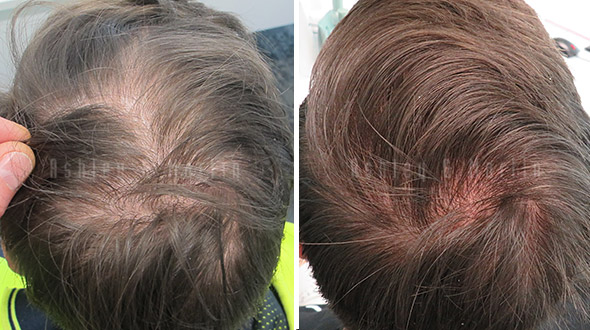