After being conscious of his hair loss for the past seven years, Connor*,  now in his mid forties, was finally ready to tackle the problem head on. He’d heard the many radio ads for Ashley and Martin and made an internet enquiry.

The process was surprisingly easy, and Connor was contacted and invited to his local Ashley and Martin hair loss clinic for a free consultation. He discussed his options with the consultant and was pleased to find out that a tailored treatment plan could be offered to him. He discussed his family history of hair loss (his grandfather had suffered from hair loss) and was diagnosed at Norwood level IV. After considering treatment for over three years but never actually acting on it…now was the time to begin. He enrolled on the day, keen to commence the 12 month RealGROWTH® treatment plan.

Connor stuck to his regime diligently. As a single middle-aged man there was no-one to rely on except himself – he was committed to the laser treatments and anything else that would give him the best chance of re-growing his hair. He trusted in the process completely, after all, it was Ashley and Martin’s reputation as leaders in the hair regrowth industry  that had been the driving force behind Connor’s choice of clinic.

And it was a wise choice. His results exceeded not only his own expectations, but his consultant’s as well. He’d been a single guy for a number of years but his new hair had given him the confidence that he needed to put himself out there and start looking for someone to share the next chapter of his life. 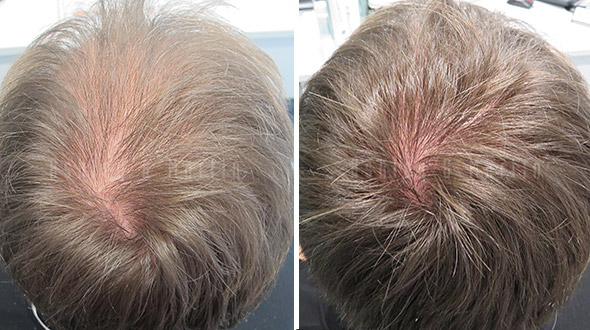