While not too obvious to other people yet, the thinning on Greg’s* scalp had been playing on his mind for at least a year. His grandfather, father and uncle had all gone through the same genetic condition, but he wasn’t sure he was ready for it yet. Having seen the advertising on television with men in the same position talking about the results they had achieved after reaching their turning point, Greg contacted Ashley and Martin online.

Speaking with Greg, the Ashley and Martin hair loss consultant found there were no other underlying medical issues affecting the growth cycle of Greg’s hair, he lived a healthy lifestyle, and was relatively stress free. Based on this information and the pattern of loss he observed during a scalp examination, the consultant diagnosed Greg with Norwood level III vertex male pattern hair loss. With his strong genetic ties to hair loss, this had not come as a surprise to Greg. What was surprising was how easy and quick it would be to reverse the damage done to his hair by his genetics over the past three years. To date, he had not been bothered to try any other hair loss solutions, but the Ashley and Martin RealGROWTH® medical hair loss program appeared to be the solution he was looking for. Quick, easy, affordable, and medically proven, the RealGROWTH® program would halt his excessive shedding and regrow hair he had previously lost. With the support of his wife who had encouraged him to seek treatment, the 29-year-old signed up straight away.

Whilst Greg tried to be consistent in adhering to his treatment routine, he struggled to remember it every night. That did not stop changes visible enough for his wife to notice from happening though. By the time he returned to see his consultant to monitor his progress on the program, neither Greg nor his wife could be happier with the new hair he had grown and how thick and healthy it was looking. 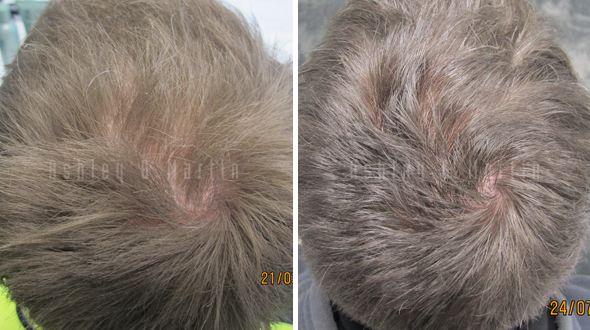