As soon as Mike* noticed his hair begin to thin, he started to think about how to stop it happening. For eighteen months Mike had looked in the mirror and wondered if there was a hair loss solution that actually worked. Having heard about Ashley and Martin on television, he went online to find out more. Satisfied that Ashley and Martin had a good reputation for providing medical hair loss treatment that delivered what it promised, Mike filled in the online contact form to request a call back from his local clinic.

After discussing factors that may be impacting the growth cycle of Mike’s hair and examining his scalp, the consultant informed Mike that his hair loss had started much sooner than he had realised. Taking on a promotion in his high stress, professional career together with genetics inherited from his grandfather had caused Mike’s hair follicles to miniaturise and enter extended dormancy. And the only way to save his hair would be to prompt those follicles to produce new hair before they died completely. Placing the onset of Mike’s hair loss at five years ago, the consultant recommended a RealGROWTH® program to address his Norwood III vertex loss.

While Mike wanted time to think things over before making the decision to undergo treatment, ultimately the pride he took in his appearance won out. He contacted the clinic and made an appointment to speak to the clinic hair loss doctor and commence treatment.

When Mike attended his first Ashley and Martin Review appointment four months after commencing treatment he had an answer to his question. There really was a hair loss solution that actually worked. Just sixteen weeks into his treatment plan and already his hair had increased in density. The 36-year-old medical professional was extremely happy with the amount of progress that had been made in such a short amount of time. 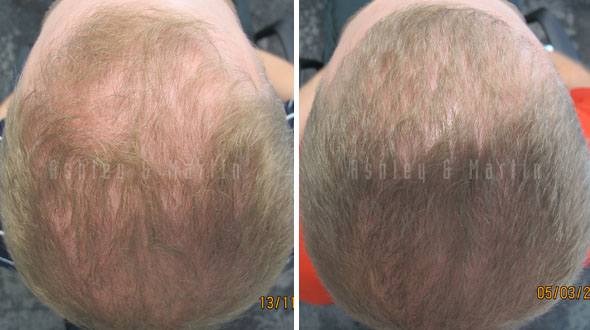 Case Study: Curious Client Finds There Really IS a Solution to Hair Lo

Case Study: Client Was Convinced Nothing Could be Done Until Ashley an