In the past ten years, Joseph* had undergone treatment with two other hair loss clinics to try and resolve his hair loss issues. Each time he had ended up disappointed and disheartened. He had spent a year diligently treating his hair with the first company he had approached, only to find he had achieved minimal, if any, results. Five years later he had tried again simply to find himself back in the same position. Another five years on from this experience, Joseph was ready to try again. Although hesitant due to his previous disillusioning experiences, the 40-year-old was keen to find a way to regrow hair.

Having lost a great deal of density in the mid-frontal area, his consultant explained the treatment she would recommend to stop his hair shedding and regrow his own hair. Understanding his reluctance, she took the time to explain the difference between Ashley and Martin’s multi-faceted medical hair regrowth program and the other treatments he had tried, the reasons behind the 98% success rate of the RealGROWTH® program, and the honest truth about what could and could not be done with medical hair regrowth treatments. Follicles that had died would not be able to be revived, however those that were merely miniaturised and dormant would be able to be moved forward into a healthy growth phase, leading to large improvements in density. Determined to achieve the best results possible with this treatment, Joseph enrolled straight away and added a LaserPro home laser treatment device to his package.

Four months into his treatment, Joseph was ready for his first Ashley and Martin Review appointment having already experienced more regrowth in sixteen weeks than he had in all the time on the other treatment programs he had tried. Finding the RealGROWTH® treatment routine extremely easy to use, Joseph had been excited to see fine, new hairs beginning to grow in a month previously. And was equally excited to see what would be achieved over the coming months. 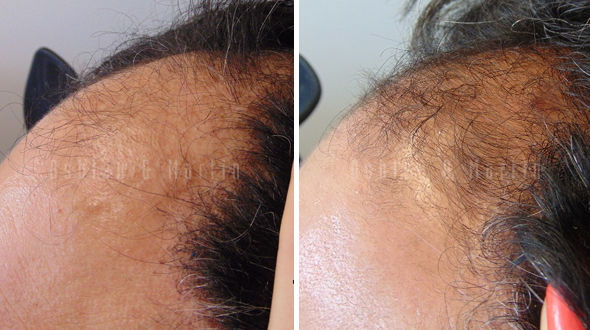