When Russell* reached his turning point, he was just 22 years old. He had wanted to do something about his thin, patchy hair since he had turned 21 and finally, after listening to the stories told by other men his position on TV, he decided to look into Ashley and Martin.

It was Ashley and Martin’s reputation that prompted Russell to take the first step towards regrowing hair by submitting an online request for a free consultation. Being so young, he was extremely conscious of his hair loss and did not want to lose it all in his twenties.

The consultant Russell met with performed a scalp examination which confirmed exactly what Russell had suspected. He was suffering from Male Pattern Hair Loss which had been ravaging his hair for the past five years. To address his genetically inherited Norwood III Vertex loss, Russell’s consultant offered a RealGROWTH® medical hair loss program as the best course of action. Wanting to make a well-considered decision, one that was right for him at this time in his life, Russell went home to think over everything he had learned in his appointment.

A few weeks later he returned. Ready to start his RealGROWTH® program, Russell booked an appointment to see the clinic doctor for a check up and to have his medication prescribed.

It was not long before Russell noticed his shedding slow down to a normal rate. And following that he began to see fine, new growth starting to appear where his follicles had once lay dormant. By the time his second Ashley and Martin Review was due, the difference he could see on screen between his before and after photos was astounding. Russell’s hair was thicker, denser and healthier. And his smile broader. Taking in the photographic evidence of the success of his program, Russell knew the reputation he had chosen Ashley and Martin for was well earned. 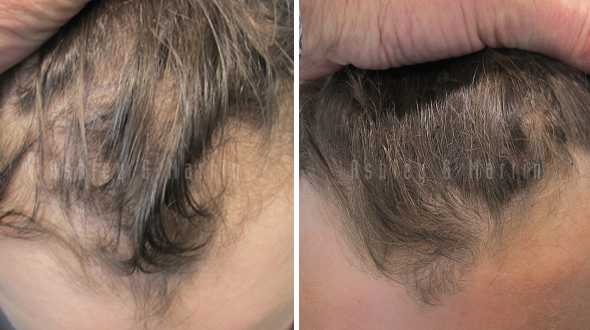